Posted on April 9, 2016 by Jonas Andreasson | Leave a comment 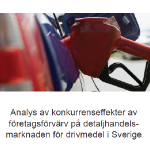 The main conclusion is that the empirical analysis does not support the hypothesis that increased market concentration in the gasoline market during the period 2001-2012 has led to gasoline companies charging a noticeably higher gross margins.

An empirical analysis of the average gross margin for gasoline 95 octane and diesel during the period 1985 to 2012 (annual basis) and 2001-2012 (monthly basis) shows no systematic relationship between a higher gross margin in absolute or relative terms and increased market concentration. Both the level of market concentration and the consumer prices of gasoline and diesel has increased during the period, but the price increase is explained by other factors than that the gasoline companies exercising greater market power as a consequence of mergers and acquisitions. The empirically most important explanation for the increase in consumer price is a higher commodity price, an effect enhanced by a proportional increase in the VAT with the increase in the commodity price.

An empirical analysis of the recommended gross prices for the major gasoline companies during the period 2003-2012 shows, first, that companies adjust their prices with little or no lag in relation to each other’s price changes and that the companies basically set the same recommended gross price. Further analysis shows that on average, the price difference between manned service stations and automatic stations decreased when comparing the years 2003-2007 to 2007-2012. For gasoline, the difference decreased from 20.3 öre/ liter to 17.5 öre/ liter. For diesel, the corresponding change is 21.4 öre/ liter to 20 öre/ liter. This change is empirically interesting because Statoil’s acquisition of Hydro and JET meant that the differentiation between the large national chains decreased. Primarily JET but also Hydro’s brand Uno -X was a pronounced automatic station chain, whose strategy was to keep systematically lower prices than service stations.

There has been a change in consumer behavior as a result of the introduction of new regulatory instruments and the ongoing technology development. The majority of new car sales in Sweden have shifted from gasoline to diesel cars. Increasing fuel efficiency has driven a rationalization and reduction of the number of fuel stations in Sweden. The trend has moved from 4391 gasoline stations in 1984, to 3930 in 2003 and 2885 in 2011. Since 2003, 1,045 fuel stations closed down in Sweden, equivalent to 26.6% of the entire market. Since 2006 the majority of all gasoline stations are unmanned stations (1720 in 2011), SPBI (2013c).

The rationalization of station networks has increased the costs for gasoline companies, both in terms of clean-up costs for stations that had to be been undertaken, and a change in the offerings of stations on both the technical support as well as fuels sold, including the impact of the pump law, that it is mandatory for the stations to provide a renewable fuel at each station that is sufficiently large. In 2010, 1813 of 2937 or approximately 63% of all gasoline stations provided a renewable fuel (e.g. biogas or ethanol), SPBI (2013d).

This entry was posted in Anti-trust, Regulation. Bookmark the permalink.